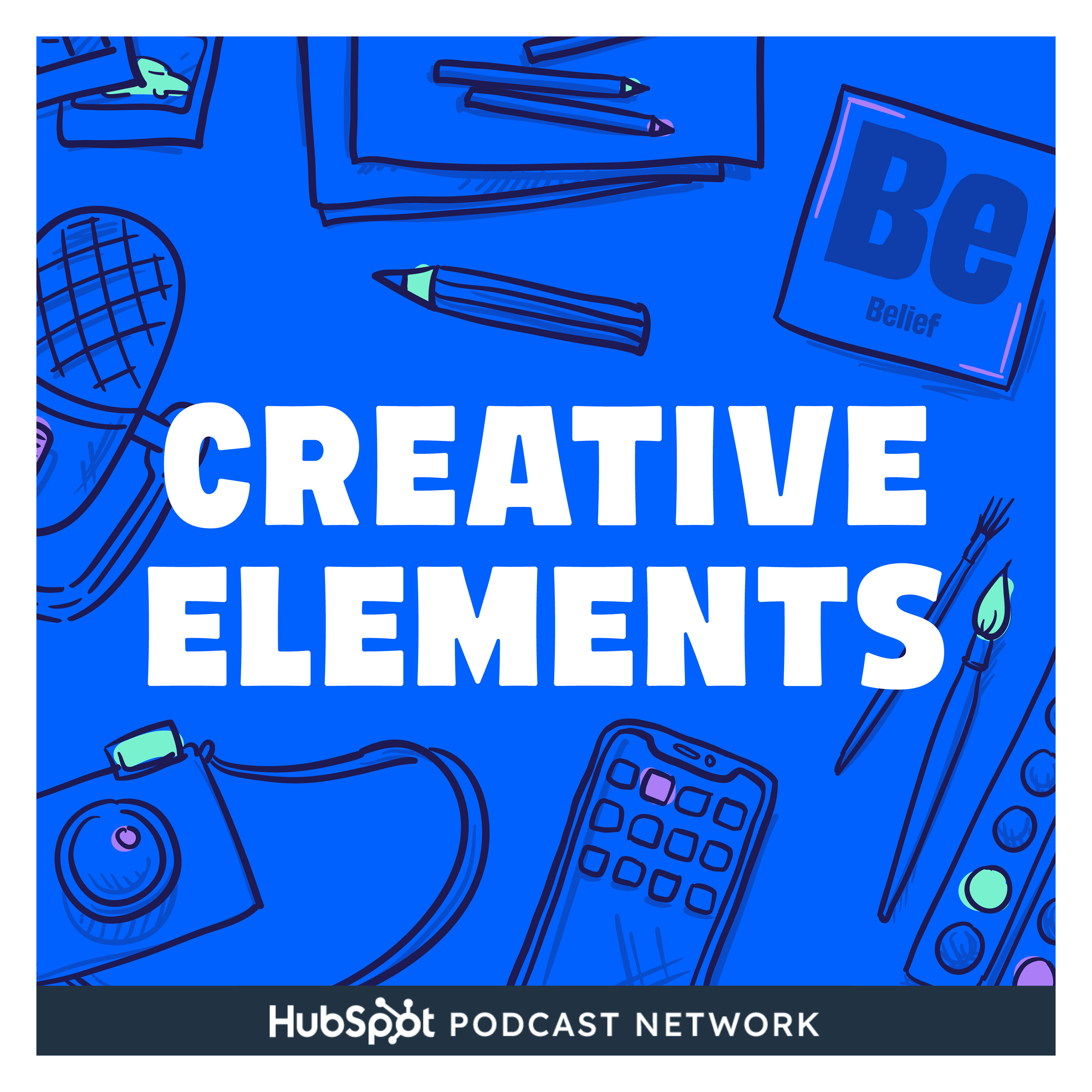 Hello my friend! Welcome to a short, audio-only episode of Creative Elements.

First off, we're taking a break from uploading to YouTube this week. So I'll share a little bit behind the scenes for why that is (and why it's scary). Then we'll get into a 12-part framework for how YOU can become more consistent with publishing and hitting deadlines.

This framework was first covered in my newsletter, Creator Science! If you don't already subscribe, I recommend you do below.

🙏 Make a guest or mailbag request

📝 Check out our curated Playlists

💼 View all sponsors and offers

📞 Leave me a voicemail

💜 Leave a review on Apple Podcasts

🟢 Leave a rating on Spotify

☕️ Buy Me A Coffee

Since you're listening to Creative Elements, we'd like to suggest you also try other Podglomerate shows surrounding entrepreneurship, business, and careers like Rocketship.fm and Freelance to Founder.

Hello, my friend, welcome back to another episode of creative elements. This is a special audio only episode of the show. This is only for my loyal audio audience who have been here since the beginning. I see you, I appreciate you. We decided this week that we're going to take a week off of publishing on YouTube. And this episode is gonna be dedicated to talking a little bit about that decision, because it's something I've been wanting to talk about for a while. And as a starting point, we need to go back to episode number 113, my interview with Austin Bell sack because he said something in an interview that I haven't been able to stop thinking about. Finally, I

sat down and I said, here's what I'm gonna do, I'm going to sit down, I'm going to write LinkedIn posts, and I'm not going to publish them, I'm just going to sit down every day, I'm going to write a post, I'm gonna save it. And I'm just going to build a massive backlog of content. And that's what I did. And I basically built out like 30 to 50 posts, I don't remember the exact number. And then I said, Okay, if I post a couple of times per week, I basically have several months of content here. And if I can write one or two new posts every week, that backlog is just going to keep extending, and hopefully that gives me enough runway to figure this thing out. And that's exactly what happened. I started posting semi weekly, I had the backlog, I dedicated time every day to writing and that clicked and that eventually worked for me.

I am so good at hitting deadlines. When I say I'm going to ship something, I ship something, I have published a newsletter every week for the last six years at least once mostly has been two times per week. I published this show every single Tuesday since launching it in March of 2020. But if I'm honest, if you actually looked at my work during the week, I am creating that work days before it publishes. And when Austin said this on the show, I just wanted to like crawl up in a ball and die. Because what this reminded me is that I went about this the absolute wrong way. Even though yes, I hit my deadlines I can publish when I say I'm going to publish, I am constantly under deadline, I am constantly under pressure to get this thing done. That's going out in a couple of days sincerely. I'm usually recording audio for this podcast just a couple days before it airs. And I'm usually writing my newsletter on Friday before it ships on Sunday. Now as I'm recording this Connor and I just finished the edit on my interview with Nick gray. That episode was intended to publish Today, October 25. However, I'm realizing now that we have this and I'm recording this on Wednesday, October 19, for full transparency, now that we have basically a week ahead of having the show done. It feels nice to be ahead. And Congress taking a few days off to travel. That's why we actually got ahead for once, but he's coming back on Monday. And so if this episode were to publish on Tuesday, he's coming right back in and we're right back on the same treadmill of have, you know, a week to publish this next episode. So I said to Connor, what if we just aired an audio only episode to talk about building runway and took a week off of YouTube. At the end of the day, it's not going to hurt the YouTube channel to not have an upload this week. And the potential upside of Connor and I not being under a sub one week turnaround for this show is going to be so great for both of us. And so that's what we're going to do this week. I will tell you the scary thing about doing this, even though I know there's not like a systemic issue with not uploading to YouTube this week is momentum. I am feeling a lot of really positive momentum right now with my work with the YouTube channel with the podcast with my writing. Everything is going well and seems to be accelerating. But in this world as a creator, you have to sustain momentum because it's difficult to get, and it's easy to lose. So the scary thing about not publishing on YouTube this week is does that slow momentum in the eyes of the YouTube viewer? Maybe two weeks from now I don't think it matters. You know if this was stopping for more than one week, I think it would be far worse but stopping for one week, I don't think it will really matter especially we come back strong with some new episodes. And we have more than a dozen episodes scheduled and more than a half dozen already recorded so we're good on pipeline. But it is scary to think about losing momentum because you work so so hard to get to a point where I feel like I am right now which is people are taking notice the work is good the work is is being enjoyed by the people that I want to enjoy it. It's helping people if you slow down you give that up. That feels like a risk. But ultimately it's a risk that I'm willing to take for the sustainability of both Connor and I and honestly I think this is the time of you year to do it, we're getting close to Thanksgiving and Christmas and New Year's. If you want to pause, build a backlog, maybe you can't get to the 30 to 50 posts that Austin was talking about. But if you want to pause and build a backlog and get ahead of schedule, to not be on the razor's edge constantly, if that's you as well, I think this is a good time of year to do it. And I appreciate you listening to this, because every interaction I've had with listeners of the show has been so supportive, so positive, and I know people aren't going to be so upset that I'm not putting out a new interview this week, people enjoy the solo episodes that I do, even though I do them very infrequently. That's actually something we have on the schedule to figure out for next year, because we want to have more direct from me style episodes, both in audio and on video. And so maybe this is a type of thing that you like, and if you do, you should tweet at me, let me know that you enjoy these solo episodes, even if they are a little bit more off the cuff. Now, I want this episode to be valuable to be very helpful. And so what I'm going to do is share with you a framework I developed to help you be more consistent. If you feel like you're not publishing consistently or delivering consistently, if you can't hit deadlines, I have a few steps for you that I think will be helpful. And that's what I'm going to cover in the rest of this episode. And that will start right after this.

Welcome back to this episode, focusing on how you can be more consistent. We've had four ideas so far. Now we have number five, which is identify and remove friction. For a long time, I hated doing anything on video, and particular about how things look and feel. So a webcam just isn't good enough for me. But it was so intimidating to think about getting a good camera, setting up the shot, making sure it had enough battery to do the thing, getting the lighting and the settings right. So every time I had an idea for some video that I wanted to make, the amount of work required to do the work I actually wanted to do was too daunting. I had too much friction. And for me to consistently create things on video, I needed to remove that friction. So I worked with a consultant to get my studio set up, they gave me gear recommendations helped me set it up with the right settings helped me get the frame, right, I got a wired battery, and I leave all the gear, camera lights, everything set up in my studio, I never take them down. And then I connected my lights to an Amazon Echo using smart plugs. I can just walk into my studio and say, Alexa, turn on studio.

Welcome back to this episode helping you become more consistent. We are up to strategy number nine, which is generate an idea engine. If you do this creative thing for long enough, you realize that you have to publish a lot of ideas, who has that many ideas? It's actually easier than you think. When I was starting my writing practice in 2017, Facebook served me an ad for a masterclass by Steve Martin. And in that ad, Steve Martin says, Remember,

you are a thought machine. Everything you see here, experience is usable.

New to the show? Check out some of our most popular episodes.

#112: Thomas Frank [Details] – Getting nerdy about YouTube and why he…

Thomas is a YouTuber, podcaster, and author who helps people become more capable and productive.

#111: Chris Do [Content] – From running a multimillion dollar design …

Chris Do is the founder of The Futur and CEO and Chief Strategist of Blind, a Brand Strategy Design Consultancy.

Tiago Forte is the creator of Building a Second Brain. Tiago has spent more than 10 years researching and personally experimentin…

Dickie Bush is the creator of Ship 30 for 30, a cohort-based course and community of people developing a writing habit in 30 days

#93: Codie Sanchez [Contrarian Thinking] – Growing a newsletter by do…

Codie Sanchez is the Founder of Contrarian Thinking and Cofounder of Unconventional Acquisitions. She helps people think critical…

Hrishikesh Hirway is a musician and podcast creator. He’s the host and creator of Song Exploder, an award-winning podcast and a N…

#88: Tori Dunlap [Service] – Building an audience of millions on TikT…

After saving $100,000 at age 25, Tori quit her corporate job in marketing and founded Her First $100K to fight financial inequali…

Marie’s transition from agency job to full-time freelance, her discovery of online education, her foray into creating a software …

Andy J. Pizza is an illustrator and the host of the Creative Pep Talk podcast.

Austin Kleon is the New York Times bestselling author of a trilogy of illustrated books about creativity in the digital age: Stea…

Making a living as a part-time YouTuber

Habits, research, and how to create A+ work from a New York Times best selling author

Art, freelancing, building a personal brand, and the problem with being authentic